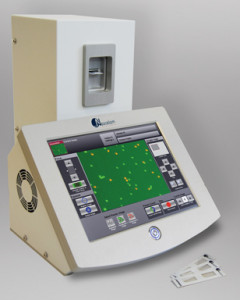 Peripheral blood mononuclear cells are used to measure immunological functions. Assays include proliferation, cytotoxicity and cytokine production. The use of cryopreserved PBMCs is critical both in clinical trials and biomedical research. In cancer immunotherapy, leukapheresis is often used to isolate immune system cells from a patient’s blood. Cells are then expanded or exposed to different agents depending on the vaccine design. Active cells are then infused back to the patient. Cell concentration and viability are essential parameters to monitor throughout the manufacturing process. Ficoll is routinely used to isolate mononuclear cells from bone marrow, peripheral blood, and umbilical cord blood. Monocytes and lymphocytes form a buffy coat under a layer of plasma. Cells are collected and washed. Typically, some residual platelets or red blood cells are mixed in the mononuclear cells. The functional assays on cryopreserved PBMC are associated with viability of the cells. Viability thresholds should be used in clinical trials in order to obtain reliable results of functional assays.